The ICTS-RBD collaborates with the University of Helsinki since April 2021 with the European Project LIFEPLAN – A Planetary Inventory of Life funded by the European Commission through the ERC Synergy Grant (https://www.helsinki.fi/en/projects/lifeplan/about).

The project's main objective is to improve the existing knowledge about the species richness on a global scale and determine trends facing global change and how they are structured in communities. The objetive is to generate the most ambitious biodiversity database, on a wide range of taxonomic groups distributed globally and systematically compiled. To do this, the project establishes permanent plots of one hectare for biodiversity monitoring in 100 sites around the world, for at least 5 years, annually alternating the study plot between "natural" habitats and "urban" habitats with more human presence (first meeting video of the Project). In the case of Doñana, the “natural” plot has been located in Doñana Biological Reserve near to the main Access. The "urban" plot is on the INTA-Arenosillo land, where it is currently until end of 2022 and then it will be moved to the RBD again. The natural plot is also located within the area of a phenocamera that provides daily information on the vegetation phenological state (real time access link and processed phenological curves). This phenocamera will allow to determine the relationship between abundance and richness of study species and phenology.

The project has 5 protocols for different variables to be measured:

More information on sampling design and protocols can be found at https://www2.helsinki.fi/en/projects/lifeplan/instructions.

As an example of this sampling, Figure 1 shows the first 26 insect samples sent for analysis:

Below, Figure 2 show a preliminary identification of one of the samples kindly made by our colleague Jose Manuel Vidal-Cordero:

Figure 2. Insect sample of the 20th of July 2021and percentage of the estimated sample for each insect Orden made as a fast observation by J.M. Vidal-Cordero.

The sample allows us to know the diversity of insect orders according to the total percentage of the sample.

A quick classification of these photographs has allowed to quantify the number of pixels occupied in the image by insects as a biomass proxy per sample throughout the sampled period (Figure 3).

Figure 3. Binarized image of one of the samples for pixel count and variation of the number of pixels per sample as biomass proxy throughout the sampled period.

The insect abundance may be related to phenology and meteorology. Figure 4 shows the minimum temperature and daily rainfall at the Palacio de Doñana manual station as well as the greenness value (GCC: Green Chromatic Coordinate) of the vegetation (fundamentally “Monte blanco”) provided by the phenocamera oriented to the LifePlan plot. 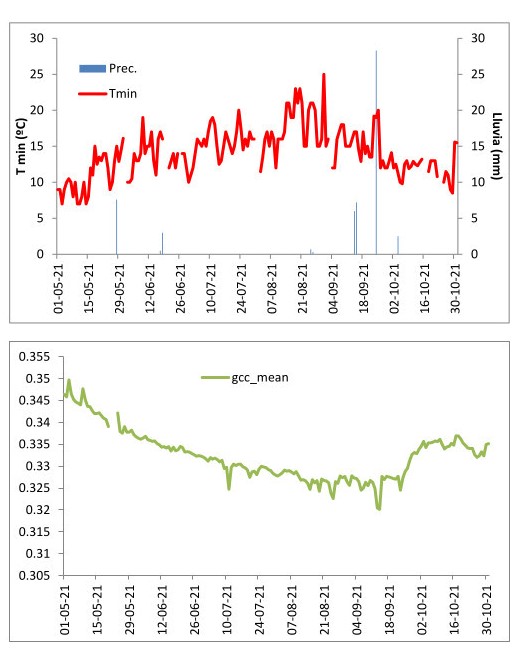 Figure 4. Daily time series precipitaction and minimum temperature of the Doñana Palace and variation of the greenness of the vegetation present in LifePlan plot through the Green Chromatic Coordinate values provided by the phenocamera.

Members of the ICTS-RBD Natural Proceses Monitoring Team will collect and send the soil samples and vials to Uppsala University in Sweden for species identification and abundance. The insect samples will be sent to the Center for Biodiversity Genomics in Canada where they are massively analyzed using metabarcoding as well as massive scanning for identification using deep learning techniques (video).